Finally managed to pop along to another Avenue Drivers Club meeting at Queen Square in Bristol on Sunday, here is a selection of the cars looking for somewhere to park at around 8 am !

Not sure of the age of this low riding Trabant 601, but it looks in way better than new condition.

Swinging in from 1966 a Rambler American.

I believe Merv Barnett’s 327 Chevrolet V8 powered 1954 Ford Popular Gasser, known as Psychedelic Relic, is usually to be found on the 1/4 mile strips at Santa Pod and Shakespeare County Raceway rather than the cobbled streets of Queen Square, Bristol.

Finally it was great to see some one else in a 2000 Volkswagen Golf Mk IV Estate, this 1,400 cc E example appearing to have bodywork and hubcaps in considerably better condition than my own.

Thanks for joining me on this “Coffee, Croissant & Cars 04/16” edition of “Gettin’ a li’l psycho on tyres” I hope you will join me again tomorrow when I’ll be looking at another Packard. Don’t forget to come back now !

The AMC Javelin was AMC’s iron in the Pony Car fire to compete against the Mustang, Cougar, Camaro, Firebird and the last entries into the Pony market segment the Dodge Challenger and Plymouth Barracuda on offer from the big three in Detroit, it was styled and developed by Richard A Teague and launched in 1968.

Short of resources the Javelin was developed from the 1966 AMX and AMX II concept cars and only offered with the two door semi fast back body style powered by one of three engine options all of which could be specified to burn either regular octane or premium octane fuel.

Despite not having a competition department, any technical support, performance parts or even a test facility of any kind AMC approached Ron Kaplan and Jim Jeffords of Kaplan Engineering to run two Javelins in the SCCA Trans Am series, in 1968.

The team with drivers George Follmer and Peter Revson who got replaced half way through the season by Lothar Motschenbacher finished a commendable 3rd with an enviable record for getting their cars to the finish.

Kaplan ran the team again in 1969 with Ron Grable and John Martin who like Revson was replaced mid season by Jerry Grant, things between AMC were not so smooth second time round which was compounded by budget cuts that saw Kaplan take all of AMC’s inventory from their workshop to AMC’s zone office in El Segundo, California at the end of the season.

AMC did a deal with Roger Penske for the 1970 season who with the aid of Mark Donohue picked up the pieces and developed them in Pennsylvania into a more competitive package.

In order to run with the duck tail spoiler Mark had developed for the Trans Am race programme AMC built 2,501 Javelin SST Mark Donohue Editions that included the spoiler, a 5.9 litre / 360 cui motor and a variety of other options that makes these cars easy to replicate and difficult to verify in the absence of a specific vehicle identification code.

Mark was joined by Peter Revson and the team finished 2nd to Bud Moore’s Ford team in the 1970 Championship, before going on to win both the 1971 and ’72 Trans Am championships with the second generation Javelin.

Today’s featured 1970 Mark Donohue edition belongs to Klass Van Dijk who was so impressed with a 1974 AMC Gremlin he bought in the 1990’s that he founded the Rambler AMC Museum in Berlikum, Holland which now houses more than 50 AMC’s, a small collection of Chevrolet Corvair’s of the type his father drove and an eclectic mix of other vehicles.

Thanks for joining me on this “Spoiler Homologation Special” edition of “Gettin’ a li’l psycho on tyres” I hope you will join me again tomorrow. Don’t for get to come back now !

The AMC Ambassador, also known as the Kenosha Cadillac after the town in Wisconsin in which it was built, went through eight generations of development between 1958 to 1974. Marketed up to the third generation as the Ambassador by Rambler the model was marketed as the Rambler Ambassador under the direction of George Romney, Chairman and President of AMC in 1962.

When George became 43rd Governor of Michigan in 1963, Roy Abernethy took over at AMC and convinced the board at AMC to phase the Rambler name out starting 1966 in what subsequently proved to be an ill conceived decision.

By 1968 the Ambassador was in the second phase of the sixth generation and a new for ’68 SST trim line was made available in which air conditioning was standard with a ‘delete option’ putting the Rambler ahead of Cadillac and Lincoln and on a par with the likes of Rolls Royce in the air conditioning (A/C) stakes.

Along with the A/C the luxurious SST package, which was available with a Sedan or Hard Top Coupé body, came with individually reclining front seats, federally mandated seat belts, wood look interior trim, an electric clock and buzzer to warn occupants if the headlights were left on.

From the rear the ’68 Ambassador is distinguished by the horizontally divided tail lights, recessed into body coloured bezels like those at the front. 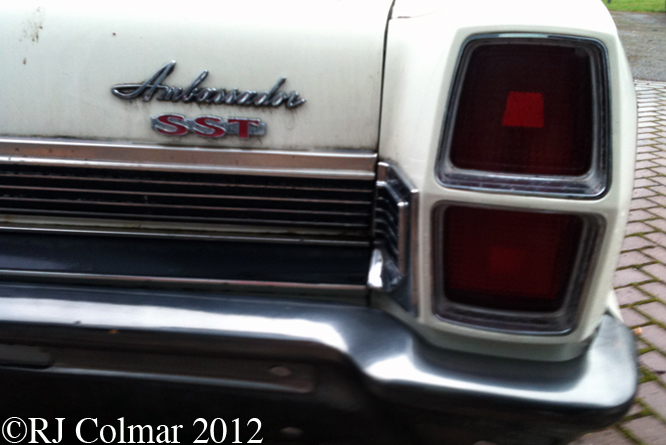 Despite a new advertising campaign which broke with convention of not attacking the competition, while overall AMC sales went up, Ambassador sales fell by 13% in 1968 and the Rambler name was phased out of the Ambassador by the end of the ’68 model year and out of all US market AMC products in 1970.

Thanks for joining me on this ‘Standard Air Conditioned Rambler’ edition of ‘Gettin’ a li’l psycho on tyres’, I hope you will join me again tomorrow. Don’t forget to come back now !