In 1957 the sixth generation Chrysler Windsor was launched with, distinctive Virgil Exner styled tail fins and torsion bar Air Ride suspension, the following year Windsors made up 42.36% of Chrysler’s sales.

7th generation Windsors featured an interim face lift and upgrade on the 6th generation models and were only built during the 1959 model year.

External style differences included an outward flare at the top of the front wing / fender panels even more chrome on the front grill and bumper and kinked chrome side trim running the length of the vehicle.

The US Spec Golden Lion powered ’59 sedan seen in these photographs taken at Bristol Classic Car Show, Shepton Mallet was first registered in the UK on the 1st of May 2008.

Thanks for joining me on this “Golden Lion” edition of “Gettin’ a li’l psycho on tyres” I hope you will join me again tomorrow for Ferrari Friday. Don’t forget to come back now !

Last week I looked at the Birkin Bentley with which Tim Birkin set the outright Brooklands circuit record from John Cobb driving a V12 Delage at 137.58 mph in 1932.

In order to regain the Brooklands outer circuit record John Cobb commissioned Thomson & Taylor to build a racing car to replace his 1923 Delage. Ried A Railton was given the task of developing what has become known as the Napier Railton around a 24 litre / 14,627 cui 12 cylinder Napier Lion motor that started life as a design for aviation applications in 1917. 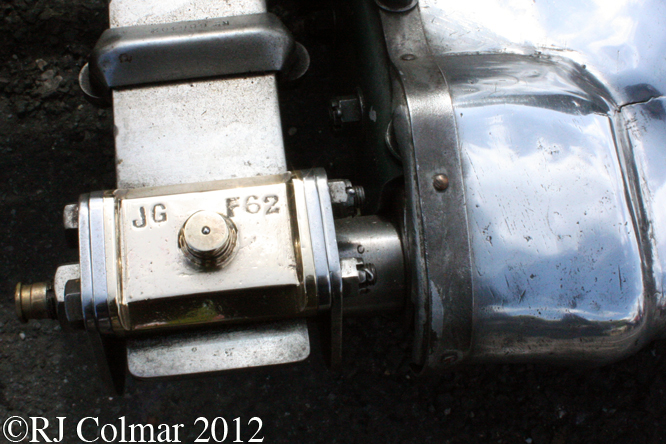 The extremely rough nature of the 2.75 mile Brooklands outer circuit meant that no single detail of the new challenger could be anything less than rock solid to withstand the pounding punishment of the concrete track which would regularly pitch cars into the air at speeds in excess of 120 mph.

Weighing in at two tons the Napier Railton had a theoretical top speed of over 160 mph, despite this it was only fitted with 16 inch rear drum brakes to save weight.

Equipped with beam axles, front and rear, the front one was suspended by a pair of semi-elliptic leaf springs and four friction dampers.

Where ever the eye falls on the Napier Railton there is an overwhelming sense of strength, above the front leaf spring, on the right is the beam axle ahead of the steering arm on the left.

During it’s first tests the Dunlop tyres proved wholly inadequate, but this problem was overcome by the time Cobb made his first appearance in the car at Brooklands in 1933.

Despite it’s large capacity the Napier Lion motor with it’s three banks of four cylinders each with twim overhead cam shafts was relatively compact, compared to a similar capacity V12 with two row’s of six cylinders for example.

However in order to keep the machine stable over the bumps at speed the Napier Railton has a 130 inch wheel base with a 60 inch track front and rear.

The mounting points for the twin rear leaf spring sets is alongside the cockpit.

The huge revolution counter did not have to work particularly hard the Napier Lion produced over 500 hp at just 2,200 revolutions per minuet. The gear box had three forward gears and no reverse.

The bare aluminium bodywork is credited as being by Gurney Nutting.

After it’s success on the track pre 1939 and after an appearance in the film Pandora and the Flying Dutchman alongside James Mason and Ava Gardner released in 1951, the rear drum brakes were replaced with these aircraft style disc brakes so that the car could be used to test aircraft braking parachutes by the GQ Parachute Company at Dunsfold Aerodrome in the early 1950’s.

After John Cobb set the outright Brooklands circuit record at 143.44 mph, thanks to the subsequent break up of the circuit a record that will stand in perpetuity, Cobb took the Napier Railton to Bonneville Salt Flats where he set a world 24 hour record at 150.6 mph.

John Cobb and Reid A Railton would work together again on the Railton Special featuring two Napier Lion engines, one driving each axle. The Railton Special became the first car to exceed 350 mph in 1939 and renamed the Railton Mobil Special it became the first car timed over 400 mph in 1947 when Cobb left the Land Speed Record at a two way average of 394.19 mph. Cobb was killed making an attempt on the water speed record in his jet powered boat Crusader in 1953.

In 1997 the Brooklands Museum acquired the car after it had been repatriated from a collection in Leipzig.

When not in view at the Brooklands Museum or on what remains of the Brooklands track the Napier Railton can be seen doing what it does best at events like Wings and Wheels at Dunsfold Aerodrome.