A couple of years ago I took today’s featured photographs of Alistair Hunt’s Juno at Crystal Palace.

The event Souvenir Programme tells us the car was built in 1955 and there are one or two references on the internet to the car being powered by either a JAP, unlikely or Triumph, more likely, motor.

Searching the word “Juno” at The Nostalgia Forum led me to a reference regarding the 1920’s play by Sean O’Casey “Juno and the Paycock” and “Juno Beach” which was liberated by Canadian and British Forces in the Normandy Landings on D-Day 1944.

It would appear the late author David Hodges may have owned the Juno, but this has yet to be confirmed.

So if per chance you know anything about the Juno, who built it, owned it and or drove it please do not hesitate to chime in below.

Thanks for joining me on this “We Want Information” edition of “Gettin’ a li’l psycho on tyres”, I hope you will join me again tomorrow when I’ll be looking at one of Jim Clarks Lotus 38’s. Don’t forget to come back now !

Delta Motorsport was founded in 2005 by Managing Director Simon Dowson and Technical Director Nick Carpenter to transfer skills honed in motorsport to areas where innovative solutions are critical to performance, efficiency and optimisation.

In 2011, with match funding from the East Midlands Development Agency and the Technology Strategy Board, Delta Motorsport built a small run of prototype electric E4 Coupés to show off their skills.

Thanks for joining me on this “Very Well Behaved” edition of “Gettin a li’l psycho on tyres” I hope you will join me for Maserati Monday tomorrow. Don’t forget to come back now !

After experiencing less than outright success at Le Mans with the Cadillac Le Monstre Cunningham in 1950, Chrysler powered Cunningham C2R in 1951, similarly powered C4R in 1952 and C5R in 1953 Briggs Cunningham decided that three short comings of the previous designs had to be addressed.

His next new project the C6R, had to be smaller, lighter and right hand drive to optimise weight distribution on a circuit with predominantly right hand corners.

The C6R was also originally intended to be powered by a race bred 340 hp 4.5 litre / 274 cui Ferrari V12 motor of the type more commonly found in a Ferrari 375MM of the type he had run at Le Mans in 1954 for Phil Walters and John Fitch.

Responsibility of the design for the body of the C6R was handed over Herbert “Bud” Unger who had worked on the bodies of the Cunningham C4R and C5R Cunningham’s as a metal worker.

In correspondence with me, about the design, Mr Unger said; “The engineers wanted maximum air flow to the brakes front and rear…” These were 13 inch air cooled drum brakes, prone to fading when hot. “I made the front air intake as large as possible and also extra air intakes on both sides beside the main grille air intake.

Next, I tapered the side of the body in from the front fenders all the way back to the rear fenders and by large air scoops to get maximum ram air into both rear brakes.”

By the time the car appeared at Sebring in 1956 with it’s unpainted aluminium body, crafted by “a man form Europe that was an expert with the (English) wheel.

Briggs, for reasons unknown, compromised the original design criteria by fitting a modified 3 litre Indy 500 engine running on petrol instead of the usual alcohol brew.

Le Patron shared the driving at Sebring with John Gordon Bennett and they retired from the race on the 54th lap after the clutch disintegrated.

When the C6R appeared at Le Mans the body had some alterations including a single smaller front intake and a D-Type Jaguar like headrest and rear fin and the car ran over the weekend with the rear brake cooling intakes in open and blanked off configurations.

During the course of it’s second race Briggs and Sherwood Johnson found the C6R started loosing gears and it retired from 13th place after 18 hours after the engine had enough of pushing the car round in forth, top, gear only.

Briggs Cunningham raced the car one more time in 1955 at Road America where the Offy motor again expired for good.

The car did not run again until 1957 by which time a 3.8 litre 6 cylinder Jaguar six cylinder motor had been fitted. 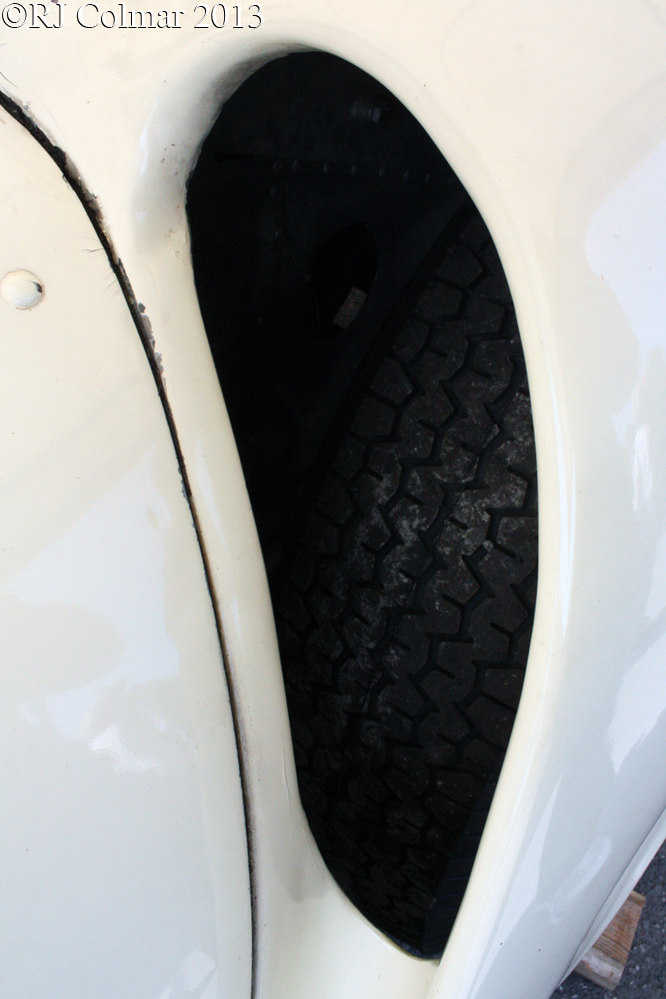 Briggs raced the car on four occasions with a best known result of 9th at Lime Rock in June 1957.

The car was permanently retired to Briggs Cunningham’s collection thereafter which has since become part of the Collier Collection. It is seen here at recent Goodwood Festival of Speed meetings.

My thanks to Mr Unger, Cunningham Motorsport Historian Lawrence W. Berman, Paul Kierstein from the photo archive and Sondre Kvipt in Norway who facilitated my correspondence with Mr Unger. Thanks also to Herbert at The Nostalgia Forum who brought up the subject of the C6R’s blanked off rear air intakes.

Thanks for joining me on this “Smaller, Lighter, RHD” edition of “Gettin’ A L’il Psycho On Tyres” I hope you will join me for Ferrari Friday tomorrow. Don’t forget to come back now !

This weeks Ferrari Friday features a couple more Ferrari related items from the 1970’s currently on offer from my lightpress e-bay listings.

First up a MotorSport cover from May 1970 featuring an image depicting Mario Andretti on his way to winning the Sebring 12 Hours driving a Ferrari 512S which he shared with Ignazio Guinti and Nino Vaccarella.

Mario Andretti cited this drive as the drive of his life in the British magazine Autosport many years ago because he was co opted into the #21 Ferrari after the #19 he had qualified on pole with Art Mezario had retired with gearbox trouble while 11 laps to the good over the rest of the field.

To win the 12 Hours Andretti had to catch and pass the Solar Productions Porsche 908, shared by actor Steve McQueen and pro driver Peter Revson, when he stepped into the #21 with just an hour of the once round the clock race to go. Having passed McQueen for the lead Andretti had to come in for fuel and as he left the pit lane he was but a few seconds ahead of the famous actor and remained there just 22 seconds ahead at the flag.

The Michelin advertisement above depicting a Ferrari Dino comes from the back cover of MotorSport in December 1973.

Finally the another MotorSport front cover from June 1974 depicting Niki Lauda at the wheel of a Ferrari 312 B3 on his way to winning the 1974 Spanish Grand Prix, this was Niki’s first Grand Prix win.

Thanks for joining me on this “Ferrari Covers & Ad” edition of Gettin’ a li’l psycho on tyres” I hope you will join me again tomorrow for a look at a Ford Thunderbird with an unusual paint job. Don’t forget to come back now !

A couple of Ferrari items I put up for auction on e-bay at lightpress this week include this Shell advertisement published in MotorSport in October 1967 showcasing the success of Shell sponsored cars in the 1967 world sports car championship which was won by Ferrari after Dan Gurney and AJ Foyt driving a Ford won the 1967 Le Mans 24 hour series glamour event and Chaparral won the BOAC 500 mile race at Brands Hatch with Phil Hill and Mike Spence sharing the driving.

Despite the model being out of production for 3 years by the time it was published, this July 1971 Castrol GTX advertisement features a Ferrari 275 GTB/4.

Thanks for joining me on this Ferrari Ads & Cover edition of “Gettin’ a li’l psycho on tyres” I hope you will join me again tomorrow. Don’t forget to come back now !

Continuing to clear some of the motor racing stuff I have collected over the years today’s post features a couple of MotorSport covers that are currently on line on my “lightpress” e-bay account.

First up from April 1966 the staff at MotorSport believed that the idea of an apparently arbitrary 3 liter / 183 cui limit on the size of forth coming GT regulations was not either in the interest of the sport, or the British motor industry who’s GT cars from Jaguar and Aston Martin with motors over the new limit would be rendered obsolete despite not being particularly quicker than their competition with smaller motors. The photo shows the start of the 1963 Goodwood Tourist Trophy race featuring four Ferrari 250 GTO’s, 2 Aston Martins and 2 E-type Jaguars which was won by Graham Hill in the #11 250 GTO.

By June 1966 the Ferrari V12 3 litre 183 cui Formula One car was looking a good bet to win the championship with 1964 champion John Surtees at the wheel. John is seen guiding his Ferrari 312 fitted with a downsized sports car V12 motor through the streets of Siracusa on his way to an easy non championship victory. Note how Sicilian spectators are clearly seen ligning the inside of the crash barriers which were presumably installed to protect them. By the end of June John Surtees quit the Ferrari team after a disagreement with Ferrari management which deprived him and Ferrari of Championships which up until then had been theirs for the taking.

Finally after a humiliating defeat to Ford at Le Mans in 1966 in February 1967 Ferrari stole a little Ford thunder by claiming victory in the Daytona 24 hour race. Seen on the cover of the March 1967 edition of MotorSport is Lorenzo Bandini at the wheel of the #23 Ferrari P3/4 he shared on his way to victory with Chris Amon. The #26 North American Racing Team Ferrari P4 driven by Pedro Rodriguez and Jean Guichet finished second.

Thanks for joining me on this “Sixties Ferrari Covers” edition of “Gettin’ a li’l psycho on tyres” I hope you will join me again tomorrow. Don’t forget to come back now !

A couple of Ferrari items I put up for auction on e-bay at lightpress this week include this Shell advertisement published in MotorSport in October 1967 showcasing the success of Shell sponsored cars in the 1967 world sports car championship which was won by Ferrari after Dan Gurney and AJ Foyt driving a Ford won the 1967 Le Mans 24 hour series glamour event and Chaparral won the BOAC 500 mile race at Brands Hatch with Phil Hill and Mike Spence sharing the driving.

Despite the model being out of production for 3 years by the time it was published, this July 1971 Castrol GTX advertisement features a Ferrari 365 GTB/4.

Thanks for joining me on this Ferrari Ads & Cover edition of “Gettin’ a li’l psycho on tyres” I hope you will join me again tomorrow. Don’t forget to come back now !