For those needing a NASCAR fix while the series is taking a break today’s car is the #46 Hunter Brothers Chevrolet Impala, seen here at Palo Alto earlier this year, that operated out of Hendersonville NC in 1965. 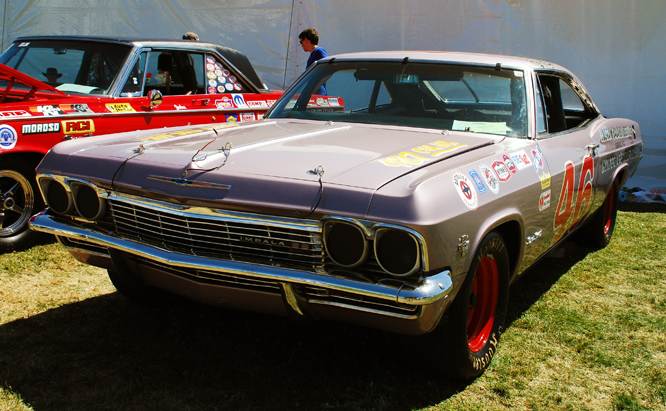 This car was driven by US Airforce Sergeant Roy Mayne, from Sumter SC who was given permission to race while on active duty. His best finish was in 1965 when he drove this car to a 4th place finish behind Ned Jarret, Buck Baker and Darel Dieringer in the September 6th Southern 500 at Darlington.

From 1963 to 1974 Roy drove in 139 Grand National and Winston Cup events scoring 22 top ten finishes. He never compete in a whole season his best end of season standing was 25th in 1966. Roy was one of the stunt drivers in the 1968 Elvis Presley movie ‘Speedway‘.

The new for ’65 fourth generation Chevrolet Impala set the all time industry annual sales record of more than one million units sold. Chevrolet finished 3rd in the final standings of the 1965 Grand National season behind Ford and Dodge.

My thanks to Geoffrey Horton for sending me the photos.

Wishing all my fellow NASCAR fans a relaxing day off, see you all at Rowdy Chat for the Brickyard 400 next Sunday.

Thanks for joining me on this ’65 Impala edition of ‘Gettin’ a lil’ psycho on tyres’ I hope you will join me again tomorrow. Don’t forget to come back now !